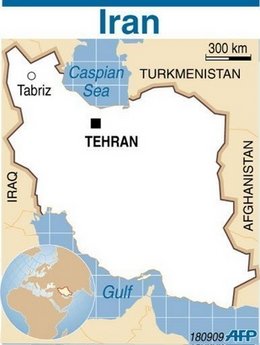 It is so obvious that Iran is trying to make an atomic bomb, nothing else. But the problem is that Irans´ nuclear facilities are extremely dangerous to Iranian people before they are to the rest of the world. Why?

We know by facts that Russia for years is selling Iran its old and potentially dangerous military equipments including nuclear materials, short and long distance robots, diesel submarines and other war machines that Russia had in its military service more than fifty years ego. It just makes me laugh that for example these submarines and old war materials can cause any potential danger let´s say for American forces or American presence in the region. American forces can neutralize Iran´s military forces without any bigger attempt, as they did it with Iraqi military war machine. It is the same with Iran´s nuclear facilities in Natanz and Qom. There is no structured supervision on those facilities if something goes wrong, as it is the same almost with all Iranian activities. That is why we can not see in principle any progress in any area of effort, planning and implementing by Iranian Islamic regim. We know again by facts that Iran buys any military product from the international black market that it can buy and we could see during the Iran-Iraq war that many of those products were not of the best qualities and that was for example a reason that many cargo planes and strike aircrafts crashed during the war and it is happening even now. One could see many times that soldiers´ handguns in the battlefield did not work which caused probably the death of thousands of them.

As president Obama put it lately: “Iran has right to nuclear energy.” No one is disagreeing with it. But Iran´s attempt to make a nuclear bomb makes this country more dangerous to its own people, countries in the region and even to the rest of the world. If Iranian delegation in United Nations were not a bunch of liars they could have a transparency policy about their nuclear facilities and they could receive help and equipments from the international communities in order to build these nuclear facilities with modern standards without causing any potential danger to Iranian people in the first place.

The thing is that they do not want to have a healthy relationship neither with the international community nor with their own people because they know very much that they got the power by deception, killing, raping and so on. If Iranian regime wanted to win the Iranian hearts and gain an international respect and recognition they could redo the election, this time with the supervision of international observers and show both the opposition/Green movement and the world that Ahamdinejad received 64 percent of the votes. But everybody knows that these people are a bunch of criminals that take advantage of Islam and making the life of Iranian people like hell in this “material world”, promising them to be in paradise in an afterlife of “holy world”, while they are living a life in this material and fatal world which is alike the one they are promising the people of Iran after their death.

One of the main concern and priorities of Green movement must be giving Iranian people information and clarifying for them that a rusty and old nuclear facility and making an atomic bomb by buying almost out of order and out of used materials from the European black market, mainly from Russia and former Soviet Union republics for billions of dollars making Iranian people just poorer and it´s bedding for a mass killing, a disaster.