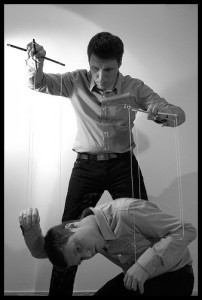 The internal and external locus of control is a psychological theory meaning that people used to put the control of what is happening in their lives within outside or inside themselves. They act, react and even feel in different ways based on where they put (usually subconsciously) their locus of control. As a matter in fact people move between the two of them all the time and depending on where they put their focus – internal and external- they will be able to deal with different situations differently.

By internal locus of control it means that an individual has a belief system with which s/he will be capable of managing different tasks and giving herself or himself credit for managing it. The individual simply believes that s/he has control over her/his destiny. A person with an external locus of control has instead a belief system, thinking and believing that others are better than her/him, and that s/he has just been lucky to manage with a task. The individual simply believes that s/he has no control over her/his destiny.

The risk for depression will be higher if an individual with just an external locus of control puts in a difficult situation where s/he is not managing with all tasks s/he is giving to, or not receiving the amount of positive feedback s/he is needing in order to feel good and function normally. In the opposite the risk for depression will be much lower if a person with more internal locus of control puts in a stressful situation with less or no receiving positive feedback. In such a case the psychological well-being drops but the individual is less likely to end up in a pathological mental mode. The individual needs just to take measures to get back to her/his normal psychological status.