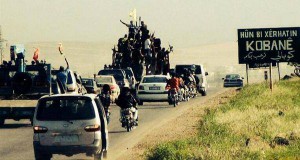 The Obama administration believes that it is not important to save the city of Kobane. They are willing to allow the city to fall. White House is thinking long term and strategic to eliminate the Islamic State, IS, they say.

Turkey stands and observe without reacting because Turkey believes that the Kurds had been their enemies for decades and it’s good that they weaken. Instead of taking this opportunity by responding forcefully and thus starting a genuine reconciliation with the Kurdish people chooses the Islamic government of Turkey to help IS by not doing anything.

The United States´ sporadic and non-sufficient airstrikes is just grandstanding. Both the United States and Turkey pick political and military points if the two sides which are contrary to each other in Kobane eliminate or weaken each other.

What these countries do not care about are the thousands of innocent individuals who are already on the run, those who lost everything. It is also a fact that thousands of innocent men, women and children have been raped and murdered by the Islamic State, IS, so far, but for the United States, it is not strategically important to save Kobane.

America and Turkey, with their non-taking action in Kobane-issue are unfortunately alongside with IS in the genocide which is taking place in the region in these very moments.

The sky is dark blue, ah

The horizon is full of blood

In a terrifying battle

In the river’s blood

In tears of heart-blooding mothers

The smell of blood

For hundreds of terrifying explosions in KOBANE

As rude and indifferent

Watching and not acting

There is no voice

No one in the world who asks why

In spite of a seventeen-years-old voice

A Malala who questions

The sky is dark blue

The sun is sad in KOBANE

With her teddy bear

Torn into hundreds of pieces

Drowned in her blood.

Abandoned on the streets

In the burned city in war

The girl with long hair

With a bullet in the head

On our city streets

The frozen city at war

Sings about the longing

Sings about the suffering

Despite so much brutality

Despite so much crime

Despite the massacre and the cruelty

Despite the groans and the screams

Despite the tears and the blood