ISRAELI RAID AGAINST GAZA AID VESSEL, A REACTION OF FEAR/ANALYSIS

The Israeli military attack on Gaza aid ship on Monday with deadly outcomes is an evidence of how afraid Israel is to lose control of the situation in Middle east and particularly in Palestine. It is obvious that the military attack was unproportionate and very aggressive, though it was carefully planed, I assume.

However it is essential to look at the event from the angle the Israelis and the Israeli forces see it.

Israelis knew that if they should let the convoy to enter Israeli water and get to Gaza Strip it could be a beginning of a huge number of humanitarian ships heading to the Gaza Strip in order to deride the Israeli government and hoping to soften the blockade. Do not forget that the Israeli government and the Israeli people do not have any respect deep down for European governments looking back to the history of how the Israeli people have been treated and massacred of European countries. So getting aboard a number of Swedes on a ship and heading to the Gaza hoping that one can break the Israeli blockade of Gaza was just a very childish way of solving the problem, because as I said, for the first Israeli government has no respect for/confidence in European countries, particularly Sweden based on the bloody history before and during the Second World War. For the second the convoy did not have any Israelis and American (those who are opposed the blockade, and there are many of them in Israel and in the US) aboard. For the third those who ran the project Ship to Gaza needed to have some colorful Israeli for instance cultural elite on board to make sure the safety of those people aboard the vessels. The lack of those above mentioned considerations made it easier for Israeli forces to aggressively carry out the attack on the convoy. For the fourth the Israeli- Palestinian conflict is more complicated to be solved or to be teased in this way.

Do not forget that Israel is located in a very hostile region and among hostile countries that make the situation even more complicated. The Israeli government is aware of the fact that the hostile and very rich countries in the region such as Saudi Arabia and Iran can cause huge problems for Israeli people if Israel shows a weak image of itself. The fact that Israelis act in that way is because of fear they feel and they know that they are not strong enough compared with those Arabic countries and The Islamic regime of Iran which are committed to destroy the land of Israel. Israel is not that strong that the European countries want to apply.

I remember the founder of the Islamic regime of Iran, ayatollah Khomeini ones said: If every Muslim throws a bucket of water on Israel, Israel will be sunk. That is the reason they act as they do. It is a reaction of fear. It is not an action of strength. 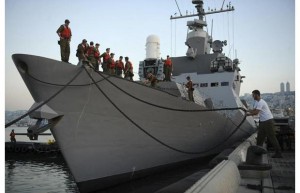